Despite Quake being mostly gloomy, I've yet to tire of its aesthetics—it's the most beautiful game to me.

Of course, as an artist, I wish to participate in something I love. However, as with making games, there's no immediate satisfaction: it's a lot of work. I mostly avoid any project that takes more than a couple hours to complete. Pretty much everything I do is small, janky, and immediate.

Making a map for Doom was difficult enough, and to add even more complexity on top of that in Quake just seems absurdly involved to me. So in order to make it fun, I create my own standards. I'm choosing to leave good quality maps to others because I know that's not my strength. I'm going experimental by using the vanilla engine in ways that make use of my capabilities.

I plan on making at least one map per month. I have set the following constraints to push me creatively:

• Map must take less than five minutes to complete

• I'm going to try to make each map wildly different. My ultimate goal is to create a WarioWare-like mappack, so I'm thinking of these as gaining experience. 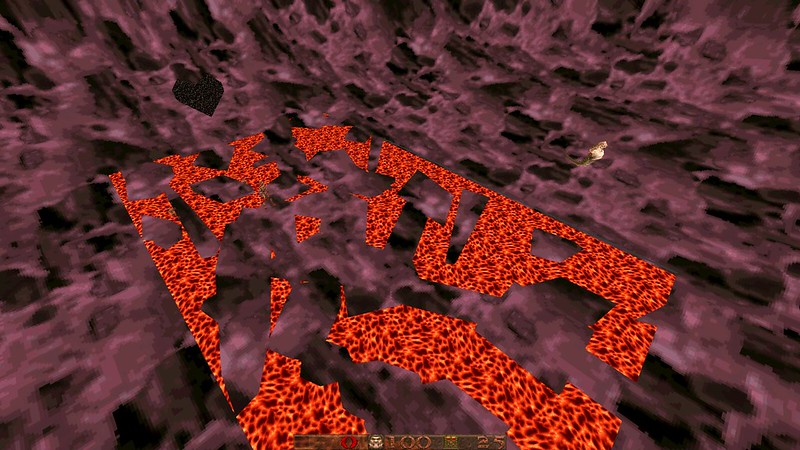 This is my first completed map, my second attempted one. I did it in 4-5 hours (that includes re-learning how to use Trenchbroom), so I'm really happy that I finished it. I'm ambivalent about the map itself.

I find using the sky texture on objects quite fascinating, with polygonal structures flattening out. I gravitated towards this/the "Bloodfalls glitch" with the Doom map I made, as sort of a curiosity, so I applied it here as well. I enjoy leaning into the weirdness of what happens within games.

My Doom map as played by JP Lebreton. Time stamp is 41:59 if it doesn't automatically go there.

I'm also a huge fan of optical illusions/visual oddities as well. The closest experience to this map that I can think of is Bennett Foddy's Zebra

. The visual obnoxiousness was so much fun to figure out, but I'd have to say not knowing what I was initially looking at was the most exciting because I was able to imagine all sort of possibilities.

It's obvious that this map is pretty far from regular Quake gameplay. I designed it so that making way to the exit requires more observation and slow movement than a typical jaunt. The first section can be passed by looking for/listening to torches that provide an indicator of where to go. The jumping section toys with distance and perspective.

Additionally, because the jam required that I included enemies, I tried using the Scrags as dynamic indicators of where the walls are (since they disappear behind them). They're placed above _wateralpha 0 brushes so you don't have to engage with them. I like them as decoration. The zombies were just thrown in the last room randomly because I was running out of time, lol. I wish I could have just disabled weapons (as least the boomstick) but I couldn't figure out how/if that's possible in vanilla before the deadline.

I referenced one part of Moshe Linke's Fugue in Void, an experimental walking simulator. Being that I want to toy around with atypical gameplay, using non-FPS genres for inspiration is a starting point to help me push myself. 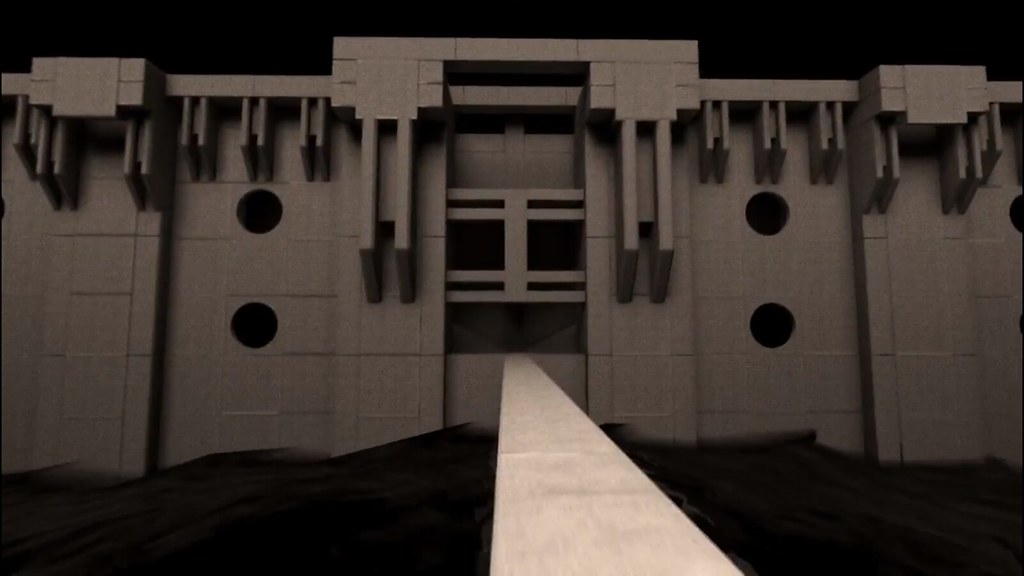 The part in Fugue in Void I reference

I honestly feel way out of my league because the quality of every speedmap I have played felt impossibly high to aspire towards; I would have started mapping last year if I didn't have that mental hurdle to clear. It's kinda scary doing this, but I'm pretty happy that I am. 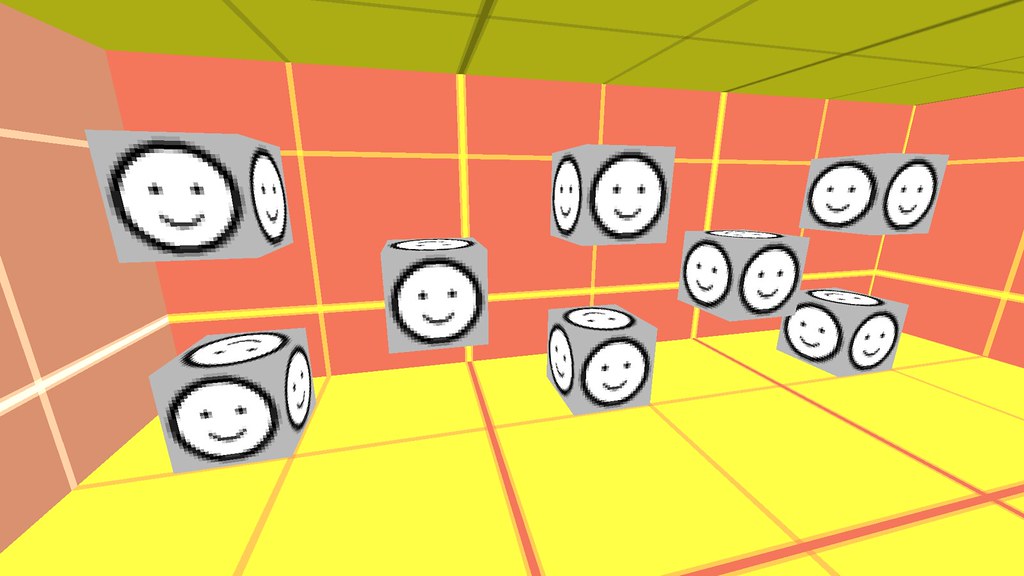 The concept was to take the structure of WarioWare and put it into Quake: Make multiple minigames in one map, with success adding up at the end. I will (hopefully) be releasing a full-sized version in about a year, since I'd really like to build my skills for some time before doing a full solo release. It worked perfectly that SM206 was using the Protoype WAD because it pushed me towards making the concept and not worry about texturing (hence, the map name 'Protoype Map dot map').

This time around, I was able to spend more time learning Trenchbroom. The last map was severely rushed and I didn't have time to properly work. I still managed to submit an hour after deadline, but I absorbed enough to feel much better about it. Although there were a few compromises I had to make (implementing the candles instead of sigils, the secrets/teleports, and needing so much text to explain it), I'm happy with where I am for now.

I think, at some point, I might want to organize a WarioWare-like jam. I definitely don't have the knowledge to do that anytime soon, and I'd definitely want to integrate into the community more. I mentioned in the Discord that Quoffee kinda felt like this already, but I'd want to push it further into the microgame concept. 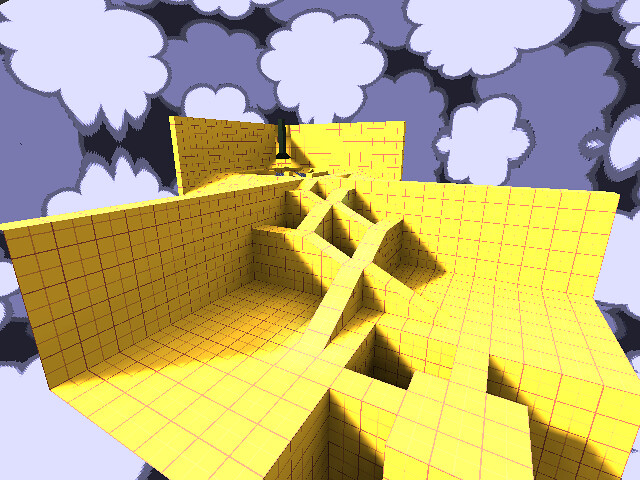 Being that I'm only interested in making pacifist maps, I'm pulling from other genres to incorporate into Quake. It's great because there's a wealth of material to inspire me (or, in this case, completely rip off).

I started creating Marble Madness geometry just because I was curious how it could translate into Quake gameplay. Eventually, it felt great to have pre-existing architecture to copy since it would help me learn how to use Trenchbroom without worrying about what I was going to create. The best part about this was that Marble Madness is gridded so it's all simple to measure out. Fortunately, each square scaled to 64 units in Trenchbroom very well. The only time I went off that was for details and ramps that didn't align to the vertical 64 units.

I completed the Intermediate Map (minus the moving parts), and I figured I might as well just remake the game. That's when I realized that if I did that, I'd probably have to put in some enemies... and I'm not willing to do that. Also, it would probably work best as a multiplayer racing game, and that's another thing I'm not interested in.

Instead, I just mashed together different parts of all of the maps. In a way, it's the game remixed into one map. Once I finished the geometry, I realized it was a bit dull as it is... I mean, I liked it as it was, because I'm just in love the with abstractness of it, but I knew others need a bit more of a pull. I decided to add a little bit of "decay" to the map, I guess you could say, sort of gradually. The last section isn't a part of that trajectory because I couldn't figure out the earthquake thing... a bunch of stuff just wasn't working (even Vanilla things I've done before), so I just made it the very silly too-easy thing it was. I guess because this is for the Joke Jam, I wasn't too concerned about it.

Overall, I feel pretty good about it. I finally feel like I'm understanding Trenchbroom, and I'm not struggling other than some quirks here and there. 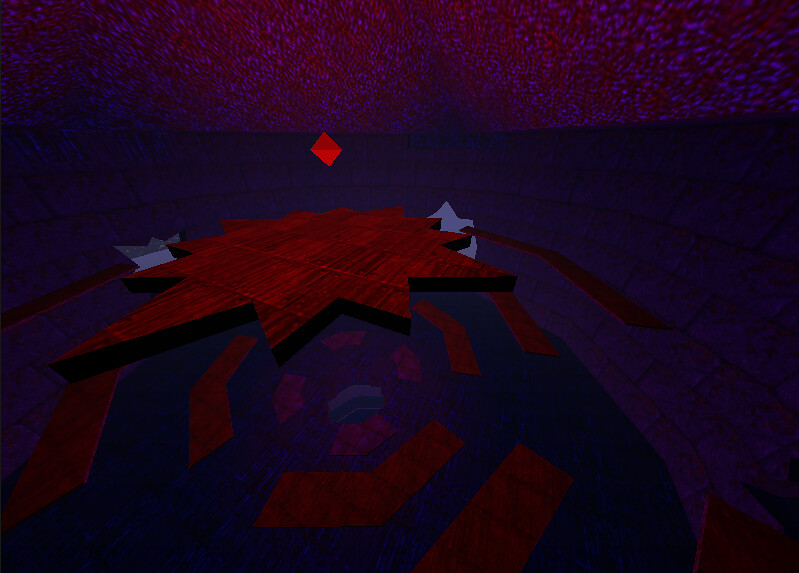 This is an interactive fiction map. There's an intro room explaining that it's slow and experimental. I know that making something like this as a Quake map doesn't make a whole lot of sense, but I just love this game and the custom maps being made for it. I just want to be a part of it.

The biggest inspiration is Muscle World. It's a game where the main method of traversal is bound to one plane, a ceiling you climb from. Architecture hangs down from the ceiling, inverting the expected playfield. Some of the structures have a few storeys, but are only accessible from one of them. For my map, I decided to use a water plane. I included a few methods of moving from the water to a structure as well.

In regards to the narrative, I decided to keep it rather abstract. I have a difficult time reading purple prose, but love when authors leave out details for the reader to fill in. Besides the fact that this would be easier for me, there's also the constraint of being able to use a short line of text in the engine, lol. I have reasons for everything, but they're not something I want to reveal. One thing I think is okay to say is that this world is composed of the narrator's memories (hence the title 'untitled memory story').

I'm pretty happy with it. I learned a lot about geometry and I feel more confident about Trenchbroom. The biggest downfall is not knowing about func_detail because the VIS'ing took 6 hours. 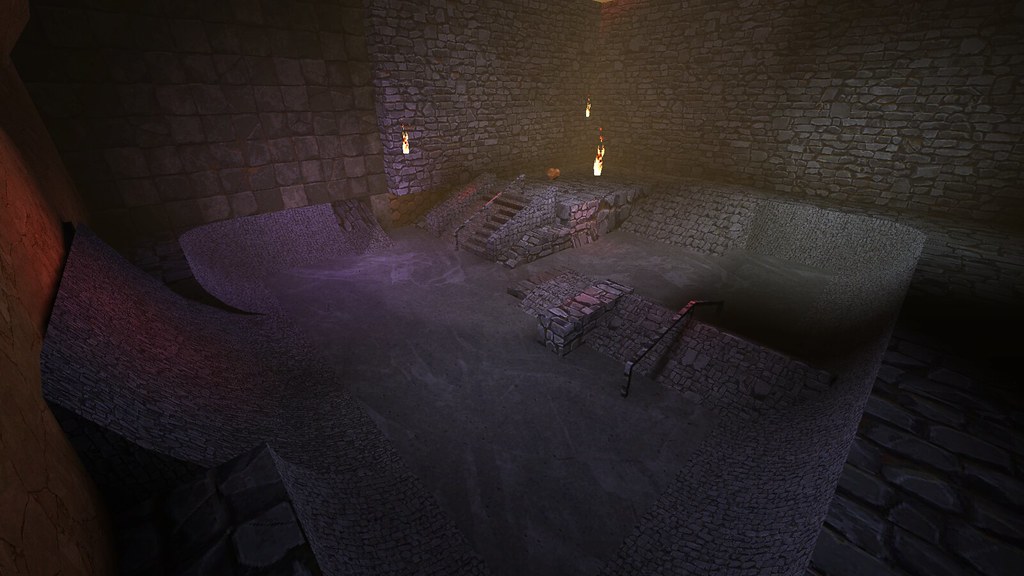 This is an alternate universe of my favourite local skatepark, Washington-Jefferson Skatepark. Click here to see video of myself (with my friend Jacob, the redhead) skating at this park. (note: it's unlisted, so I can't embed it here)

The night before the theme was announced, it popped into my head to replicate the gameplay of the THPS (Tony Hawk's Pro Skater) series. Besides the fact that I've put the most hours into these games, I've also had plenty of fun jumping around on angled planes in Quake. The biggest revelation that I could do this was because of Greenwood's Sewer Jam map that took place in a series of fullpipes. It was incredibly fun to just jump around, and I knew I had to expand upon that. I forgot about it, then rediscovered the joy when building my Marble Madness map.

My original goal was to closely replicate the Career mode goals in the early games: Collect 5 floating letters, perform a map=specific task, find the hidden tape, etc. I will probably still do that, but I realized I would have to make custom models... wait, instead of spelling out Q-U-A-K-E, I could just do 5 Q's... lol. Oh well. starshipwaters had mentioned wanting to make a THPS map, so maybe...? The reason I ended up going with my local skatepark instead of a THPS level people would already know is because there's no preconceptions about it. I think, someday, maybe I could run a THPS jam...?

The way the map ended up is definitely a stretch to the theme. Originally, I wanted to incorporate rock walls into the geometry of the skatepark, but I remembered that I needed to scope properly, so I just decided to do something more straightforward. I guess the idea of escaping this skatepark by going outside is not too bad--after all, it's definitely a cave/crevasse modified by humans.

Boxes with Shapes and Colours

Note: all of these fall into a non-combat, walking sim vibe

♥ A map that only makes sense from one perspective (default FOV)

♥ A map inspired by FUMIKO!

♥ Recreations of locations that are really cool

A lot of things I want to do aren't possible in vanilla Quake. Some are possible with console commands, but I'd like to have these available at start:

♥ Player starts with r_drawviewmodel 0 (ideally, just disable the use of weapons, including axe)

♥ Text can span more than one line


Back to main page